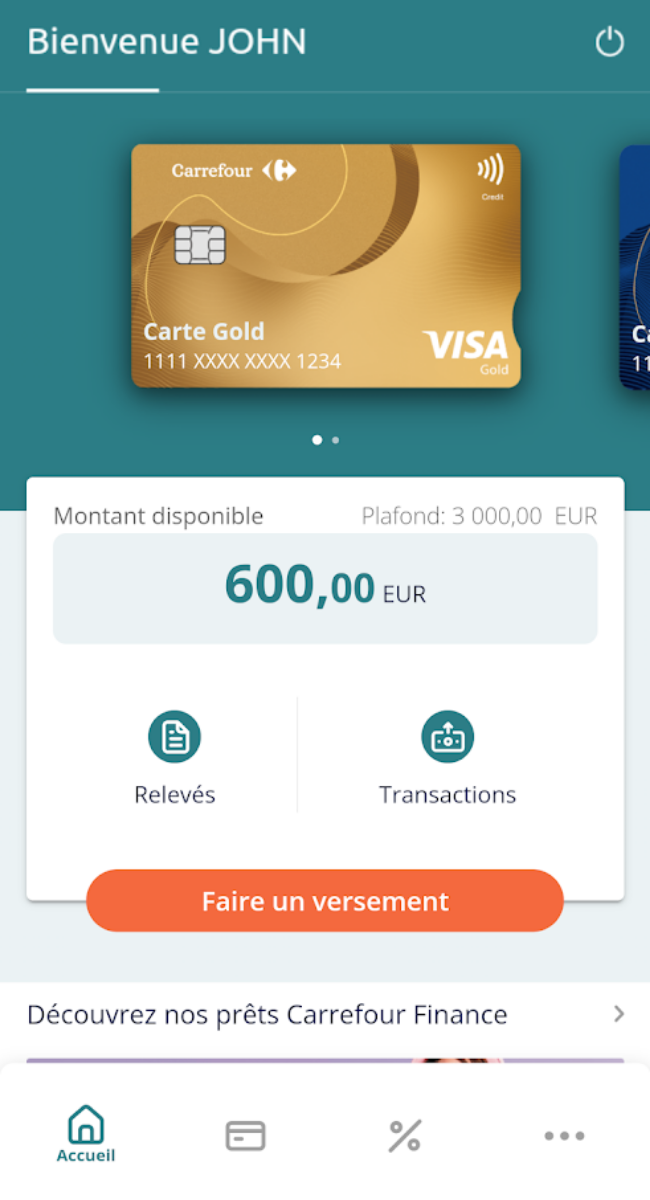 For 30 years, Carrefour has been providing financial solutions for both purchases and personal projects of its customers. The company does this under the name Fimaser or Carrefour Finance. You can get credit cards from Carrefour Finance and take a loan. Through loyalty benefits you get advantages at the Carrefour supermarkets, such as discounts, double bonus points, ...

Carrefour Finance already had a mobile application for several years. However, it suffered from several technical problems. The app was slow and regularly displayed error messages. There were problems in both the front-end and back-end, which did not benefit the app. A completely new mobile application was inevitable.

It's one thing to develop a new app. However, a financial app has a huge need for high-quality security. Online security is an essential component for all financial apps. Data privacy, customer trust and long-term growth all depend on the security of the app. Extra attention is paid to this as the app will be accessed on different operating systems and devices.

On the old app, the design had become somewhat outdated. The corporate identity of Carrefour Finance was not sufficiently visible. This had an impact on the recognisability of the app. In terms of user interface and design, there was still a lot of work to be done.

Endare developed a completely new front-end, while Carrefour Finance took care of the new back-end. It was important that the front-end and back-end would eventually form 1 entity. The right choice of framework was therefore crucial to get started.

For the development of the app, Angular/Ionic was chosen as the framework. The technical knowledge of the client was taken into account, making Angular/Ionic a logical choice for the future and for further internal maintenance. The step to building a native application is a lot smaller because of this choice. Where Angular is the framework to develop web applications, Ionic takes care of the packaging in a native app. The latter makes it possible to use the native functions of the iOS and Android device. Think of the fingerprint scanner, the camera for Face-ID, etc. Via Capacitor, both frameworks come together. This is an underlying technology within Ionic that allows you to use certain features that a regular web app would not be able to. Like the native features of iOS and Android apps.

In order to keep the transition period to the new app as smooth as possible for users, it was temporarily still possible to use the old app. In time, however, all users had to switch to the new app.

The new app is much more modern and future-proof than the old one. The design has become more contemporary, with a lot of focus on the recognisability of Carrefour Finance. To improve this recognisability, workshops were organised by our design team. During these workshops, important aspects of the house style were determined and later used in the development of the mobile app.

As mentioned before, excellent security is a must for a financial app like Carrefour Finance. In order to guarantee this security as much as possible, some efforts have been made. By means of SSL-pinning, we have ensured that you can log in safely. Through SSL-pinning, the back-end immediately knows whether you are logging in with a safe device. When this certificate is not correct, because it is forged for example, the communication will fail immediately.

Furthermore, you will be automatically logged out of the app after 3 minutes of inactivity. After 30 minutes of constant activity, the app will also ask you to authenticate again for your own security. Rooted devices or any device with no screen lock protection in place will not be able to use the app.

While the new app may not show major differences in functionalities, it is important to note that the app works much more stable and faster than the old one. The new app is also much more secure, ensuring that all user data is protected.

Now it is also possible to create an account and password within the app itself. Previously, this was not possible and all onboarding was done via the website. By removing this step, the onboarding process becomes much easier for the user. Especially since today's users mainly rely on a smartphone as their main device. By making this possible, a hurdle has been removed and this will automatically lead to more users of the app.

Do you have plans for a digital product in mind? Contact us and together we will discover the possibilities.